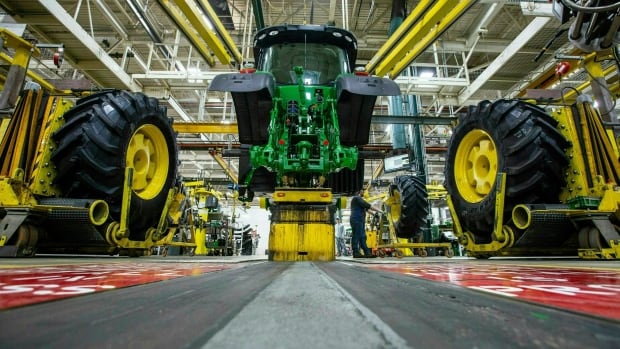 The union had said its members would leave work if an agreement had not been reached by 11:59 pm Wednesday. The vast majority of the union rejected a contract offer earlier this week that would have given five percent raises to some workers and six percent raises to others at the Illinois company known for its green tractors.

“The nearly 1 million retirees and active members of the UAW stand in solidarity with the striking UAW members at John Deere,” said UAW President Ray Curry.

Brad Morris, Deere’s vice president of labor relations, said in a statement that the company is “committed to a favorable outcome for our employees, our communities and everyone involved.”

He said Deere wants a deal that improves the financial position of all employees.

“We will continue to work around the clock to understand our employees’ priorities and resolve this strike, while keeping our operations running for the benefit of all those we serve,” Morris said.

Deere’s production facilities are major contributors to the economy, so local officials expect any strike to be short-lived.

“We definitely want our economy to stabilize and grow after the impact of the COVID-19 pandemic,” Moline Mayor Sangeetha Rayapati told the Quad-Cities Times. “Hopefully these parties can reach a resolution soon.”

The strike takes place in the middle of the corn and soybean harvest season, at a time when farmers are struggling to find parts for tractors and harvesters.

First strike at the company in decades

The contracts under negotiation covered 14 Deere plants in the United States, including seven in Iowa, four in Illinois and one in Kansas, Colorado and Georgia.

Talks about the contract at the Moline, Illinois-based company were unfolding as Deere expects to report record profits of between $ 5.7 billion and $ 5.9 billion this year. The company has been reporting strong sales of its agricultural and construction equipment this year.

As a result of that performance, CEO John May’s total compensation jumped last year to nearly $ 16 million, from $ 5 million the year before, according to SEC documents.

Deere, which has about 27,500 employees in the United States and Canada, had previously said that its operations would continue as normal. The company’s presence in Canada includes nine parts and distribution centers, according to the company’s website.

It’s been 35 years since Deere’s last major strike, but workers were encouraged to demand more this year after working long hours during the pandemic and because companies faced a worker shortage.

“Our members at John Deere are striking for the ability to earn a decent living, retire with dignity, and establish fair work rules,” said Chuck Browning, vice president and director of the UAW Department of Agricultural Implements. “We remain committed to negotiation until the goals of our members are achieved.”

Chris Laursen, who works as a painter at Deere, told the Des Moines Register before the strike that it could make a significant difference.

“The whole nation will be watching us,” Laursen told the newspaper. “If we position ourselves here for ourselves, our families, for basic human prosperity, it will make a difference for the entire manufacturing industry. Let’s do it. Let’s not be intimidated.”

Earlier this year, another group of UAW-represented workers went on strike at a Volvo Trucks plant in Virginia and ended up with better wages and lower-cost health benefits after rejecting three tentative contract offers.

Before the pandemic broke out, the same government agency noted a spike in overall strike activity in the U.S. in 2018 and 2019, albeit from historic low levels of work stoppages during the 1990s and first decade. of this century.

Newcastle vs Tottenham suspended due to medical emergency