Home SPORTS Syracuse scores a touchdown in the closing seconds to drop Purdue during...
SPORTS 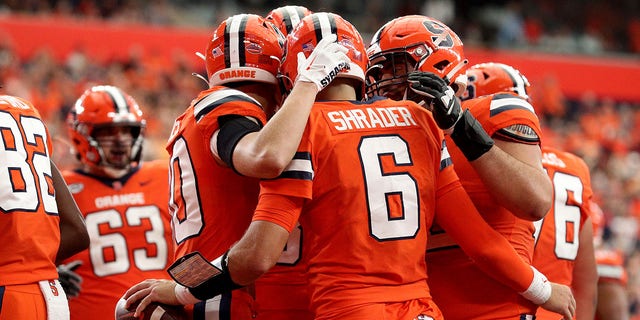 Garrett Shrader hit Oronde Gadsden II for a 25-yard touchdown pass with seven seconds remaining to lead Syracuse to a 32-29 victory over Purdue on Saturday.

That touchdown throw capped a wild fourth quarter of dramatic swings up front. Syracuse led 10-9 after three quarters and outscored the Boilermakers 22-20 in the final period. Orange improved to 3-0, their best start since 2018. Purdue fell to 1-2.

Aidan O’Connell’s 12-yard touchdown pass to tight end Payne Durham with 51 seconds left in the fourth quarter gave the Boilermakers a 29-25 lead and appeared to seal it for Purdue.

Syracuse Orange’s Garrett Shrader #6 celebrates with his teammates after scoring a two-point conversion during the fourth quarter against the Purdue Boilermakers at JMA Wireless Dome on September 17, 2022 in Syracuse, New York.
(Bryan M. Bennett/Getty Images)

O’Connell, who completed 38 of 54 passes for 415 yards and three touchdowns, threw for two fourth-quarter touchdowns to rescue the Boilermakers from a 10-point deficit. Charlie Jones caught 11 passes for 188 yards and a touchdown.

But before those heroics from O’Connell, Syracuse scored two touchdowns in nine seconds and led 25-15 midway through the fourth quarter.

Shrader’s 46-yard touchdown pass to Gadsden on fourth-and-one gave Syracuse an 18-15 lead after Shrader ran for a 2-point conversion. That touchdown happened with 8:17 left in the game.

On Purdue’s next possession, SU’s Jatius Geer wrapped up O’Connell as the Purdue quarterback attempted a pass. The ball wobbled into the hands of Orange defensive end Caleb Okechukwu, who jogged 17 yards into the end zone.

Syracuse led 25-15 at the time, but O’Connell connected with favorite receiver Jones for a 55-yard touchdown that pulled the Boilermakers within 25-22 with 6:41 remaining in the game. A missed 41-yard field goal by Mitchell Fineran with 2:54 remaining could have tied it.

The teams had met only once before, when in 2004 Purdue beat Orange 51-0 at Ross-Ade Stadium.

Purdue: The Boilermakers were without running back King Doerue, who is suffering from a calf injury. Doerue rushed for 68 yards of 18 attempts with three touchdowns in Purdue’s first two games. Without him, the Boilermakers struggled to get a lot going, but usually got a lot in the air from O’Connell. The Purdue quarterback had plenty of time in the first half and threw for 175 yards on 21-of-27 attempts. Syracuse put more pressure on him in the second half, but O’Connell still successfully threw deep.

Syracuse: Shrader had been one of the nation’s most accurate passers in his first two games this season (38-48, .792), but Purdue put sustained pressure on him early on, forcing Shrader to struggle and quit mainly an air attack. He completed 4 of 10 passes for just 35 yards in the first half. He was much more effective in the second half, completing 9 of 19 passes for 146 yards and three touchdowns. Purdue shut down Syracuse running back Sean Tucker, who rushed 18 times for 42 yards.

Purdue tight end Payne Durham, right, loses his helmet as he is tackled by Syracuse linebacker Marlowe Wax (2) and defensive back Justin Barron (23) during the first half of a game NCAA college football in Syracuse, New York on Saturday, September 17. , 2022.
(AP Photo/Adrian Kraus)

In the wake of the Tua Tagovailoa concussion controversy, the NFL and NFLPA issued a joint statement Saturday saying "modifications" are needed to the...
Read more
SPORTS

PITTSBURGH - A spectator at Sunday's game between the Pittsburgh Steelers and the New York Jets has died after falling down an escalator at...
Read more
SPORTS

A look inside the Ukrainian ‘filtration’ camps

Internet Explorer 11 is not supported. For the best experience, please visit our site in another browser.UNTIL NEXT TIMEProsecutors Call for New Trial...
Read more

The difference between this approach and its predecessors is that DeepMind hopes to use "the long-term dialogue for security," says Geoffrey Irving, a security...
Read more

Djokovic unsure about Australian Open status, but has no regrets about vaccine decision | Novak Djokovic

Novak Djokovic is still waiting to find out if he will be allowed to return to the Australian Open in January after missing the...
Read more