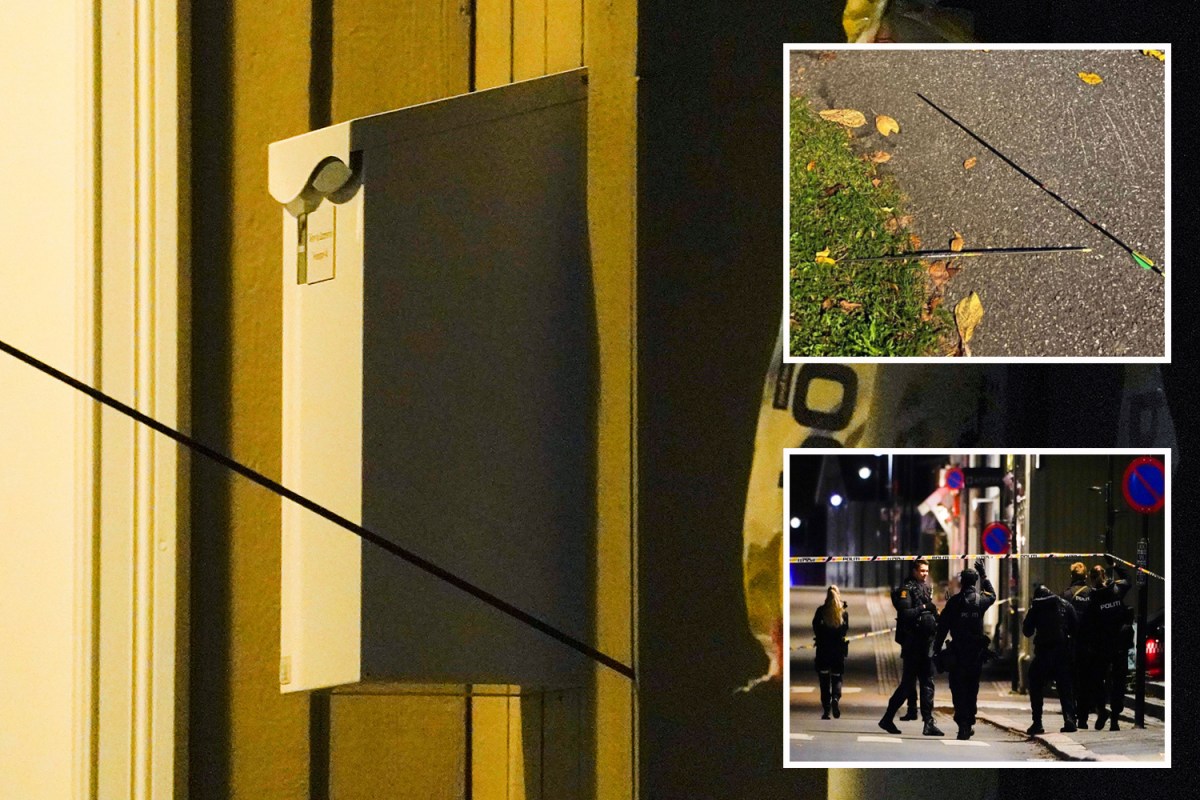 NORWAY Police are investigating a bow and arrow attack last night that killed five and injured two people for being linked to terrorism.

Police charged a 37-year-old Danish man last night after he allegedly launched a half-hour rampage in the town of Kongsberg, southwest of the capital Oslo, from inside a supermarket.

Several independent sources have informed TV 2 that the suspect is an ethnic Norwegian convert to Islam.

A large area of ​​the small town, about 50 miles from Oslo, was evacuated and cordoned off after the suspect opened fire.

Among those injured in the terror attack was an off-duty police officer, who was inside a Coop Extra supermarket during the rampage.

There were crazy screams from women … I never heard anything like that, it was a death cry

He is one of two people believed to be in intensive care.

The only murderer was arrested after a “confrontation” with police where warning shots were fired, according to local media. A chase was carried out through streets and alleys.

He was taken to the nearby town of Drammen, where he was charged with the shocking mass murder.

Heartbreaking images taken on the street show arrows stuck inside a wall after the suspect allegedly missed his target.

Witnesses spoke of the discovery of a seriously wounded woman with an arrow in her body calling for help in a pool of blood near a traffic intersection.

One told TV 2: “There were crazy screams from women. I had never heard anything like this. It was a death cry.”

Another said: “There is a guy with a bow and arrow shooting at people outside my apartment. The police and several helicopters are here.”

Acting Prime Minister Erna Solberg assured the nation that “the police are now in control” at a press conference on the “gruesome” attack.

In response to the incident, generally unarmed Norwegian policemen were immediately ordered to carry weapons.

Authorities are investigating whether the attack was an act of terrorism.

“From the information we have now, this person performed these actions alone. Several people have been injured and several are dead.

“A person has performed these actions alone.

“It is natural to consider whether it is an act of terrorism. But the man has not been questioned and it is too early to reach a conclusion.”

The police chief added that there were “several crime scenes” in the rampage, which took place shortly before 6.30 pm local time.

Mayor Kari Anne Sand said that a crisis center had been established in the city, adding: “It is a tragedy for all those affected. I’m speechless “.

The attack occurred on the eve of the seizure of power by a new government.

Ms Solberg said that the mass murder would not affect the handover and that the new prime minister would be sworn in as planned.

Discarded arrows were seen in the city last night while bomb squads, police dogs and soldiers remained at the scene.

Last night’s shooting was the deadliest attack in Norway in a decade after far-right extremist Anders Behring Breivik killed 77 people in 2011.