Home LATEST NEWS If Jesus gave a TED talk, what do you think he would...
LATEST NEWS

If Jesus gave a TED talk, what do you think he would say? 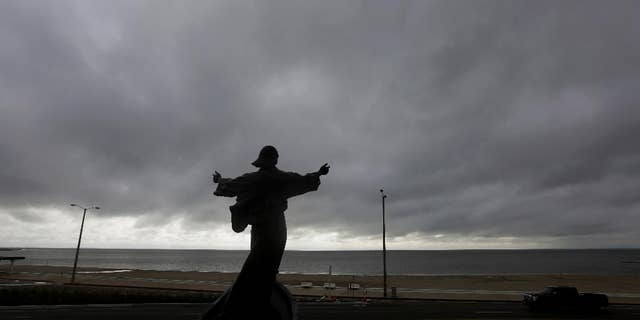 If Jesus came back today to give an 18-minute TED talk, what do you think he would say?

Do you think I could mention the nation’s current financial struggles and concerns about things like inflation? Would he address burning issues like the current political state of our country and who we, as his disciples, are voting for? Is it possible for Jesus to address our feelings towards these issues and how does this impact our relationship with him? Well, he has already done that in his Sermon on the Mount.

A statue of Jesus calming the sea titled “It’s Me” looks out over the bay and gulf in Corpus Christi on Tuesday, June 16, 2015, as Tropical Storm Bill begins to make landfall.
(AP Photo/Eric Gay)

In my new book, “18 Minutes with Jesus: Speaking Directly from the Savior about Things That Matter Most,” I address these issues and more, delving into what is known as one of Jesus’ most powerful sermons. Though brief, the powerful 18-minute sermon gets right to the heart of the issues that matter most to us: money, worry, sex, how to deal with enemies, and our eternal destiny.

In economic times like these, it’s hard to focus and do the right things, and it’s easy to fall into the many worldly traps that come our way. As Jesus explained, it is foolish for us to pursue temporal things like earthly wealth that is temporary instead of heavenly wealth that is eternal. Jesus said that wealth can be easily lost (think of a plummeting stock market) or destroyed by moths and rust (or today by inflation and high interest rates).

The statue of Jesus Christ overlooks Whitefish Lake and the Flathead Valley in Whitefish, Montana, on February 20, 2011.
(Linda Thompson/The Missoulian via AP)

AS PRESIDENT AND CEO OF WORLD VISION, I HAVE SEEN WHAT HAPPENS WHEN PEOPLE OF FAITH FACE DIFFICULTIES

In Matthew 6:19-34, Jesus explains that we have to make a choice when it comes to riches and worries. He illustrated this decision using stark contrasts: We must decide between treasures in heaven and treasures on earth. We must choose eyes that see or eyes that do not see. And decide if God is our master or if money is.

Similarly, many of the other principles preached in this Sermon, such as the eight Beatitudes, are at play in today’s decadent society. We live in a society that rejects the eight attitudes that Jesus Christ calls us, his disciples, to embody.

A pilgrim holds up three crosses towards a beam of light at the Church of the Holy Sepulcher in Jerusalem’s Old City, on May 4, 2013.
(AP Photo/Ariel Shalit)

If we want to embody the Beatitudes through the power of the Holy Spirit, we must begin by embracing perspectives and practices that are radically countercultural.

But we just can’t stop trying to effect change in our individual lives. Jesus reminded us of our responsibility to the world in which we live. That’s fine, but that doesn’t mean Christians shouldn’t try to improve their world. In this famous sermon, Jesus called his followers to be the “salt of the earth” (Matthew 5:13). In the days of Jesus, salt was a preservative that could not prevent meat from spoiling, but it could slow spoilage and extend the shelf life of meat.

A statue in a Chicago neighborhood depicts Jesus grieving over the murder of a person.
(The Baptist Press)

My friend Cal Thomas famously said, “The Kingdom of God will not come on Air Force One.” That’s fine with me. However, the leaders we elect determine the policies we follow, and those policies determine the moral and spiritual direction of our country.

Jesus concludes his sermon by talking about our eternal destiny. To spend eternity with God, you must first choose to walk the narrow path. As Jesus says in Matthew 7:13-14, there are not many ways to heaven, but only one. And lest anyone misunderstand that way, Jesus said, “I am the Way, the Truth, and the Life. No one comes to the Father except through Me” (John 14:6).

With each and every decision we make, we are choosing to walk the wide path and enter the wide gate with the masses that leads to destruction or walk the narrow path and choose to enter the narrow gate that leads to the only path. leading to a lifetime – and an eternity – experiencing God’s blessings.

dr Robert Jeffress is senior pastor of the 16,000-member First Baptist Church of Dallas, Texas, and a contributor to Fox News. His daily radio show, “Road to Victory,” is heard on more than 1,000 stations nationwide, and his weekly television show is seen in 195 countries around the world. Jeffress has been featured in many media outlets including “Fox & Friends”, “Hannity”, “Good Morning America” ​​and “Real Time with Bill Maher”. He is the author of nearly 30 books, including “Not All Roads Lead to Heaven,” “Choosing the Extraordinary Life,” and “18 minutes with Jesus,” which will be available nationwide on October 1. 4, 2022. He lives in Dallas.

DES MOINES, Iowa-- Lawyers for Iowa's largest abortion provider argued in court papers Tuesday that there is no precedent or legal support to bring...
Read more

In a strong repudiation of Donald Trump's legal arguments, a federal appeals court on Wednesday allowed the Justice Department to resume use of classified...
Read more

God save the king? The British will sing a new national anthem

The British are going to get used to a set lots of changes after the death of Queen Elizabeth II. Almost most of...
Read more