Hundreds of houses flooded in Athens as storms hit Greece 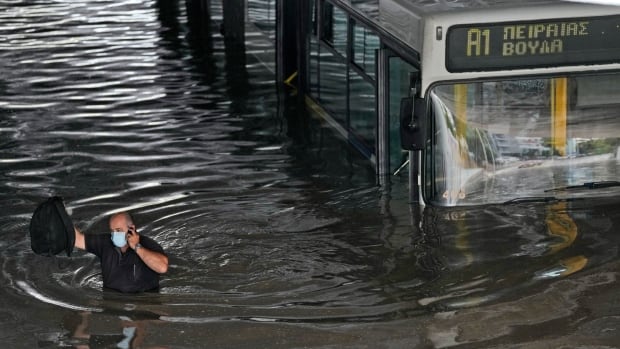 Severe storms hit Greece on Thursday, flooding hundreds of homes in Athens and prompting evacuations on the island of Evia that was devastated by the summer wildfires.

Rescuers were also preparing to use helicopters to lift stranded people off rooftops in flooded and remote areas on the northwestern island of Corfu, said Minister for Civil Protection and Climate Change Christos Stylianides.

“There is no doubt that we are facing a dangerous weather phenomenon that is very serious in some parts of the country,” said Stylianides, a former European Commissioner for Humanitarian Aid and Crisis Management.

In Evia, at least three areas affected by forest fires in August were being evacuated. Several dozen people were moved from their homes in the north of the island and were making arrangements to stay with friends or in hotel rooms reserved by the regional authority.

Forest fires in northern Evia, about 130 kilometers north of Athens, left the area most vulnerable to flash floods.

Abandoned cars after the floods

The fire service received more than 300 calls in the capital to pump water from the flooded houses, authorities said.

Dozens of vehicles were stranded on flooded roads, forcing people inside to abandon their vehicles and walk through the water to safety.

The government issued automatic alerts in Greek and English to cell phones in affected areas, urging people to “avoid unnecessary movement and areas that have been or may be flooded.”

Schools in Athens, in Evia and in a region of northern Greece near the country’s second-largest city, Thessaloniki, will be closed on Friday.

The weather is expected to improve on Saturday.

I am inspired by the young people who fight for their rights.

Video conferencing has changed the future of business